First aid reference in your pocket

Because you can't insure against all eventualities, you can at least tool up with some modern technology to help you face unexpected crises. Install the Red Cross First Aid app on your mobile - in either French or in English - and have access to first-rate first aid advice!

The British Red Cross and la Croix-Rouge française are members of the same family of charities. Founded back in 1863 as the International Committee of the Red Cross individual countries were progressively encouraged to form their own Red Cross national societies. The ICRC now operates in over 80 countries with a staff of between 12 and 15 thousand.

Mobile apps in English and French

Both the British Red Cross and la Croix-Rouge française have produced First Aid apps in their own languages so you can choose which version to carry around with you. Install both if you're not sure. (Links at the foot of this blog post.) The following is based on the English language version. All apps mentioned here are free.

We are supposed to carry a First Aid kit in our vehicles (although this is not a legal obligation) and to observe the Law of the Good Samaritan (imposing on us a duty to rescue those in need) when we travel in Europe, France included (by virtue of Article 223-6 of the French Penal Code). In spite of this, only a minority of the population is trained in giving first aid. Although being formally trained in first aid is desirable - and on the increase - having access to basic dos and don'ts is better than nothing. This sort of mobile app can save lives, so let's have a closer look.

The app covers the detail of 18 everyday first aid scenarios as well as providing sections on broader topics such as preparedness for traffic accidents or winter weather. There are clear videos, interactive quizzes and step-by-step advice. No internet connection is required for any of the app's assets. Windows, Android and Apple versions are made available. 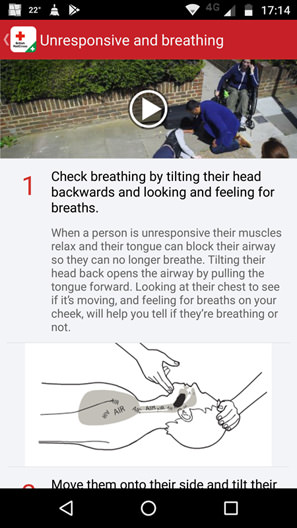 The app is primarily concerned with learning first aid but there is an emergency section which can hand-hold you through dealing with specific problems. The app's main sections are easily navigable: Learn, Prepare (for emergencies), Emergency and Test. The Learn section is detailed and gives you background information akin to that found in a text book, albeit in a shorter form - and with animations and/or video. The Prepare section offers a set of checklists that are appropriate in different situations (flood, heatwave, journey preparation, etc). The Emergency section provides quick-read, bullet-point basics that bring together what is covered in the other sections. The Test section presents an interactive test for the above materials and gives you reasonably detailed feedback about your performance. At the time of writing, the Android app has garnered a healthy 4.7/5 score from 4.7k users and the Apple app has garnered a score of 4.9. Not bad. Not bad at all. (Just note that the British version links to UK emergency phone numbers and the French version to the equivalent in France.)

In addition to the First Aid app above, the British Red Cross also has a companion Red Cross Baby and Child First Aid app. (Android and iOS versions only at the time of writing.) 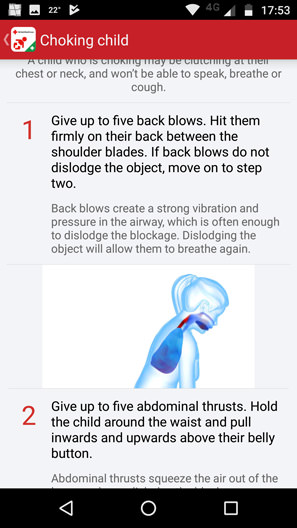 Twinned with your car's first aid kit, both these apps may well help you address a problem when you aren't in the vicinity of a pharmacy or a doctor. Bon voyage !

Note: if you wear glasses for driving, in France you MUST carry a spare pair with you in the car!

The information provided here is for general guidance. The exact details of your policy will define your legal and contractual obligations. What is written there will take precedence over what is written here.